The Orton Family played an important role in the creation and early development of the Orton Geological Museum. 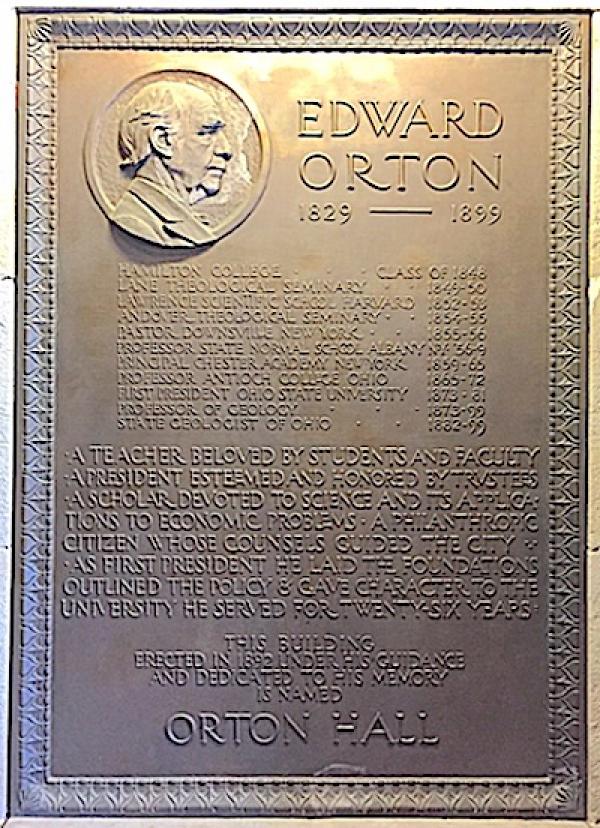 Edward Orton Sr. (1829-1899) was President of Antioch College prior to arriving in Columbus in 1873 to become the first President and Professor of Geology of the Ohio Agricultural and Technical College (later renamed The Ohio State University). He served as President from 1873 to 1881, as Professor of Geology from 1873 to 1899, and as State Geologist of Ohio from 1882 to 1899. Dr. Orton was an influential geologist with important publications on the stratigraphy and general geology of Ohio, and played a key role in the understanding of the subsurface occurrence of petroleum during the early growth years of the petroleum industry.

Above, a bronze plaque in the foyer of Orton Hall commemorates Edward Orton's contributions to science, society, The Ohio State University, and the State of Ohio.

OSU Archives has a large selection of historical documents pertaining to the life and work of Edward Orton, Sr. To see some of these, visit here: https://library.osu.edu/documents/university-archives/biographical_files/Orton_Edward_Sr.pdf

Edward Orton Jr. (1863-1932), the son of the University's first President, graduated from The Ohio State University with the degree of Engineer of Mines in 1884. After working in Ohio's iron and ceramic industries, Orton accepted an appointment at Ohio State as the founding Chairman of Ceramic Engineering. Under Orton's direction, Ohio State became the first university in the United States  to offer a program in Ceramic Engineering. The first university courses in that discipline were held in Orton Hall. Edward Orton, Jr. later served as Dean of the College of Engineering (1902-1906 and 1910-1915).

In honor of his father, Edward Orton, Jr. founded the Orton Memorial Library of Geology, which is housed in Orton Hall.

Edward Orton Jr. developed a series of pyrometric cones used in the production of ceramics, and established the Standard Pyrometric Cone Company to manufacture them. "Orton cones" are still used today to gauge the heat within kilns as ceramic materials are fired in them.

For more information about the Orton family, click here.